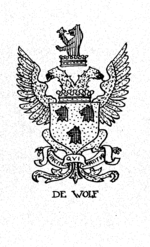 This name appears in many countries, where the traditions of its origin seem to be practically the same. The legend runs thus: Luis de Saint Etienne, of the French noble family of that name, was one day in 1370 out hunting with others, attending King Charles V, of France. During the wolf chase, a wolf cub crossed their path, at which Charles threw his lance. He wounded the cub, but the lance was broken against a tree, whereupon the great mother wolf rushed upon him from ambush. The king, having at hand no adequate weapon of defense, might have been killed had not young Luis Saint Etienne sprang between him and the infuriated beast, killing the latter with his sword. For this act of bravery the King knighted him, dubbing him "de Loup," thus originating the noble French family of that name.


About fifty years after this event, Princess Mathilde married the son of Frederick, Elector and Duke of Saxony and Emile de Loup, grandson of Louis above mentioned, accompanied her to Germany, where he became a great favorite at the Saxon court. There, four years later, he was created a baron, and his name was changed from the French to German, being known thereafter as "de Wolf," sometimes spelled with an "e". In 1534 one of his descendants, Maximilian de Wolf, founded the Belgian branch of the family, and from him has descended the DeWolfs of Holland, Prussia, and Livonia. There seems to be good warrant for the belief that the first DeWolf who came to this country was a younger son of one of the Barons DeWolf of the Livonian family, an offshoot of the Saxon branch, for Bradford Colt DeWolf, of Brussels, writing in 1901, tells of an interesting discovery he made to the effect that the Livonian DeWolfs have a tradition that one of their family left for America, at about the same period that Balthazar appeared in Connecticut. [1]


I. The name of Balthazar DEWOLF appeared first in the records of the Court of Hartford, Connecticut, when he, with others, was, on 5 March 1656, brought before a "Perticular" Court for "smoaking in the street, contra to law." Tradition says he paid his fine and lit his pipe as he walked out! He was at that time living in Mattbesick, now Middleton, and he was presented at the Court by the constable as "Balthazar de Woolfe."


In September 1661 a man and wife by the name of Jennings were indicted, charged with the offense of "having familiarity with Sathan, the great enemy of God and mankind," and by evil works and spells having caused the loss of the lives of several persons, among them being a child of Balthazar DeWolf, which was spoken of as having been "bewitched to death."</tng>. In May the same year, Balthazar was made freeman in Hartford, and three years later we find him one of the Wethersfield settlers. In 1666 he is first named in the records of Lyme, Connecticut, where he lived until his death.


The name of his wife, whom he married in 1645, was Alice Marrus Peck. Some of their children were born before the first records we have found of Balthazar in Connecticut. His wife was living in 1687. He died in 1696. Of the family it is said:

"There was some condition or quality, either in education, character, family respect, ability, personal attraction, or other unknown quality, which enabled them to marry into some of the best families of Lyme and the neighboring towns. Energy and ambition carried them away from Lyme. They were noted for habits of enterprise and industry, love of change and adventure, freedom from ostentation, domestic virtues, numerous progeny, healthiness, and frequent instances of longevity."

II. STEPHEN DeWOLF, born 1650, was member of the Lyme Train Band, as the military companies of that day were called. He was among the first settlers of Lyme, and his name appears in the records of the first town meeting, 14 January 1677. He was of "the Connecticut Volunteers" in King Philip's War. He paid Andros' tax in 1688, in Lyme. He is credited with marrying twice, the first wife is unknown and the second wife Hannah Jones. He died 17 October 1711.

By his first wife:

By his second wife, Hannah:


For continuation of this family line please see the HUNTLEY biography.