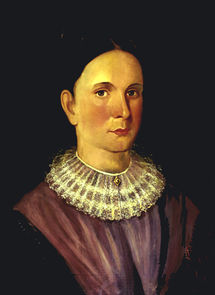 I expect that I will die within a few days. I am still a young woman, but something inside me whispers that my time is near. I have just given birth to a lovely daughter, Sarah and complications have arisen. What can I leave my children and family so that they will know and remember me? I have kept a journal over the years, not daily, but of significant events. I will take that and, like Mormon, extract parts of it along with some explanation, to tell the story of my life.


How well I remember when I first met Hyrum Smith. It was in the spring of 1821 and I was living with my brother, Seth, and his wife, Rachel. We had taken a farm in Manchester and needed some help clearing the land. We had gone up to the Smith farm... But wait; let me go back and tell you the story from the beginning.


I am Jerusha Barden, and I was born February 15, 1805, in Norfolk, Connecticut. My story really begins in the fall of 1820 when I moved to Manchester, New York along with my brother Seth and his wife Rachel. Seth took up a farm along the Canandaigua Road just south of one of the larger hills in the area.


We had been referred to the Smith family who had a couple of sons who would hire out for day labor. In the spring of 1821 Seth and I traveled up the road to visit the Smith’s and see if we could get some help. This was the first time that I met Hyrum Smith. Even in that first meeting my heart skipped a beat. But it was not that simple! There were rumors and stories about Hyrum’s brother Joseph and indeed, about the whole Smith family. While I liked Hyrum there were others in the community that were safer, such as Zack, the storekeeper’s son.


Over the next few years I grew and matured. I encountered Hyrum and the Smith family in many social circumstances, but always there was the question of Joseph. In the summer of 1826 I decided that I had to know. I planned a picnic with Hyrum with the intent to get a firm answer from him about Joseph. My plan worked and I got my answer! Hyrum really believed that Joseph had seen God and that he was destined to become a prophet. That shook me to the bottom of my own religious beliefs. Through my own prayers I got my own answer and learned that it was true. Joseph Smith was a prophet! With that realization all barriers dropped and Hyrum and I were married November 2, 1826.


What did my family think about all this? Well, they didn’t like it! They still liked me, but they thought that I had betrayed all that I had learned as a child. I tried to get them to understand that I had not given anything up, I had just added to the knowledge that I had received. Throughout my life we remained close, but none of them accepted the Gospel.


Shortly after my marriage to Hyrum, Emma came into my life, she who was destined to be my best friend, She and Joseph were married in January 1827 and they came to live with Father and Mother Smith. From that time on Emma and I were like sisters. We were parted at times, but always our hearts were linked.


After my marriage my life became centered in the Church. Joseph received the plates and translated them. In the summer of 1829 he came to visit us in Manchester and brought several other men with him. We soon learned that there were to be eight witnesses of the plates and that my beloved Hyrum was to be one of them.


When Joseph left to go back to Harmony he left behind Oliver Cowdery and the manuscript copy of the Book of Mormon. Hyrum was to be in charge of the printing of that book. One of my choicest memories is standing in the Smith cabin, watching as Oliver made the printer’s copy. What a joy it was to pick up that first page and read “I, Nephi…”


Things moved very quickly. Soon there was the organization of the Church and I sat beside Emma and Mother Smith as we watched the Church of Christ be once again restored to this earth. Soon we were in Kirtland and the word came that we were to build a temple. We, this tiny band of poor farmers, were to build a temple to the Most High God. It was unbelievable! But we did it! We built it, stone by stone, board by board, protecting at night what we had built during the day so that the mobbers could not deter us. Then came the dedication of that temple. Oh, the joy of that day! To sit beside Emma and Mother Smith and to participate in that wonderful experience. To see angels and to know that those beyond the veil were rejoicing too. It was a day never to be forgotten.


After the dedication of the temple I expected that the Church would blossom, but it did not happen. Many of those who had been staunch in the Church turned against it and Joseph. Reorganizations were necessary and Hyrum was called to be a Counselor to Joseph. This required that he travel to Missouri to be sustained by the Saints there.


I was expecting my sixth child, but gladly gave him leave to go, feeling that all would be okay. But after the birth of baby Sarah, I took a turn for the worse. Now as I write this I lay here on the bed feeling that the end is near. But what a wonderful life it has been! How blessed I have been to have been Hyrum’s first love. Yet the Spirit whispers that I was not really his first love, but his second.