I. William DUTY served as a soldier in King Philip's War, under Captain Poole. [3] This famous image painted by John Trumbull denotes our William Duty. 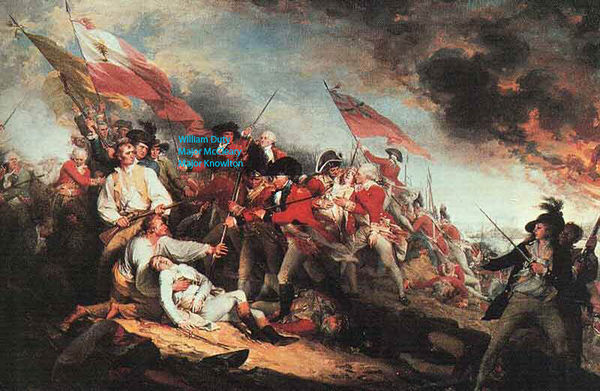 
CHILDREN, all born in Rowley:

II. William DUTY, born 31 July 1687, at Rowley, Massachusetts, married 15 April 1709 {Ibid.}, Rebecca, daughter of Anthony and Elizabeth (PALMER) (WALLINGFORD) BENNETT. [9] She was born 9 October 1685, at Rowley. He died 24 March 1753 [10], but we find no date of death of wife. They may have moved from Rowley for a time, and the births of their children be elsewhere recorded. There are, however, unprinted manuscript records of Rowley which may contain the items.


His child as listed below:


They moved to Windham, Rockingham County, New Hampshire, where he is found on a tax list 28 November 1775 "the first Province Tax under the Authority of Congress." [14] He signed the [15] was a method used to discover the loyalty of civilians in the contest between the Colonists and Britain, and was usually signed by men too old to give military service. It ran thus:

We the subscribers do hereby solemnly engage and promise that we will to the utmost of our power, at the Risque of our Lives and Fortunes, with Arms oppose the Hostile Proceeding of the British Fleets and Armies against the United American Colonies. [16]

His three sons, Moses, Mark, and William, gave loyal service in the Revolutionary War, William being at the Battle of Bunker Hill, Moses enlisting in June following and, together with his brother Mark, giving many years of military service during the struggle, both on this side and the other of the Canadian border. [17]


The following extract from History of the Visitation of Groveland, Massachusetts, in the 1863, by Alfred Poore, M.D., is of interest:

John Merrill came here and says: "William Duty, who resided on our place, was a very courageous man, He was in the Bunker Hill fight, and stood close by Major McClary, of Chichester, when a four pound ball struck and killed him." William Duty had a sister Eunice who could take up a barrel of cider and drink out of the bung. He also had a sister who was the wife of William Rowell, of Salem,....

Mark Duty, son of Moses, was living at Nottingham, West Town, New Hampshire afterwards called Hudson, in 1790, as head of a family [18] ''"Mary Duty"'' with four females in family, is also listed there that year [19] from which it is inferred that Moses, the father, had died before that date, and his widow, Mary, continued to live near her son and his family. The exact date of her death is uncertain.

IV. Mary DUTY, born at Rowley, Massachusetts, 11 October 1743, married 12 February 1767, Asael SMITH, the marriage being recorded both in Derryfield, New Hampshire, and Topsfield, Massachusetts, where she is mentioned as being "of Wyndham, New Hampshire." [23] She died in Kirtland, Lake, Ohio on 27 May 1836. She had come to know the Prophet Joseph Smith.


See the SMITH biographical sketch for continuation of this line.