This name is of French origin. Tradition says that three brothers called French were armorers in the train of William the Conqueror. "The surname FRENCH is one of the oldest and most honorable in England. It is derived from the personal name Fran(o)is in England, Franc in France, and Frank in Germany, and has been used as a surname in England since 1100. It was anglicized to Frensh, Frensche, Freneshe, etc., as early as 1300. Various branches of English families of French bear coats-of-arms, and a book has been published on the English families in various countries, and the armorials they bear."[1]. 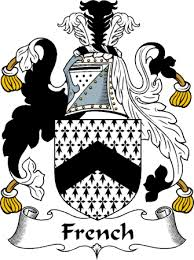 A coat-of-arms in the possession of descendants of John French, second son of our immigrant, confirms a Scotch descent of the family.[2]. 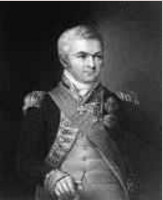 I. Thomas FRENCH, it is believed, came from the north countries of Scotland, residing for a while in County Suffolk, England, where on 5 September 1608, in Assington, he married Susanna RIDDLESDALE and took up farming. "Assington, County Suffolk, is a parish in the hundred of Babergh, in the arch deaconry of Sudbury, and diocese of Norwich. The church is dedicated to Saint Edmund, and there are records of baptisms, burials, and marriages fairly complete from 1598 to 1683."[3] There are county records which show that a French family had been early established in the Babergh Hundred, as far back as 1274. Whether our immigrant was of that stock is still a matter for conjecture.


About 1630, some, if not all, of the children of this couple (married in 1608 in Assington) came to America - in the Lion with John Winthrop Jr., it is believed. They remained a while in Boston, and then settled at Ipswhich, Massachusetts, wither they were followed shortly by the parents. On the records of the First Church of Boston, the name of Thomas French is found appearing between the name of John Withrop and that of his wife, Martha. This name, it is believed, was that of the son, as also was that of the Thomas French who was received as freeman there 6 Nov. 1632. On the First Church records it is shown that a daughter Mary was born to Thomas French in 1632, but died soon. This undoubtedly is the child of the younger man.


Thomas French, Sr., was dismissed to the church in Ipswich 27 Jan. 1639, "wither he had gone in 1634," says one historian.[4]. He died there before 5 Nov. 1639, when "the administrators of the goods of Thomas French, deceased, commit them to his wife, and the land which he left is to be disposed for sale or otherwise, by the advice of the Magistrates of Ipswich, for the maintenance of his wife, and education of his children who are not yet able to provide for themselves nor were disposed of in their Father's life."[5] This record indicates that some of his children had already been provided for.

II. Thomas FRENCH, born in England, came with his family to New England in 1631, marrying probably about that time. According to one authority, his wife appears to have been Mary, the daughter of William Scudamore, of Herfordshire, whose pedigree found in the Visitation of Gloucester, shows a daughter Mary, wife of French, of Boston in New England. The will of William Scudamore, son of the above-mentioned William, dated in London, proved in 1636, makes a bequest of five pounds each "to all the now children of Mary French, his sister," though no mention is made of New England.(IBID.)


Thomas French took the oath of freeman at Boston, where he was a member of the church. Later he settled in Ipswich, recorded there in 1638 as "Junior," his father still living. In 1647 he deeds land simply as "I, Thomas French, tailor."[6] He was a member of the Artillery Company in 1638; was sergeant of militia in 1664, in which year he also received a share in Plum Island. On later town and probate records he is recorded as Ensign.[7] His house was on Bridge Street, between Robert Muzzey and Thomas Scott, his lot covering the site of what was later the pumping station, and the land adjacent. It was inherited by his son, Thomas, the constable.[8] He died 8 Aug. 1680, his will, dated 3 Aug. 1680, being probated on the 25th of that month. His estate was inventoried at 217 pounds. He left real estate to sons Thomas and Samuel, naming also "Mary, my beloved wife," sons John and Ephraim, and daughter Mary Smith.


To his son John he left "one cow which is to make up the sull summ of 30 pounds which I formerly promised his for his Portion." He provides that his son Thomas is to "give full and free libertie to Mary my wife his mother ... and that after her decease my son Thomas shall deliver to my three children, John, Samuel, and Mary, three of the biggest pewter dishes which shall be left and remain, that is to say, to each of them one." He also left a cow to his daughter Mary Smith, and ordered that the balance of Ephraim's part be paid in money, which fits in with the conclusion that John and Mary lived near by, and Ephraim much farther away.[9] His widow, Mary French, died 8 May 1681, at Ipswich.


The CHILDREN of Thomas French Jr.