This name signifies one who whitens or bleaches cloth in a mill; a clothier. The ancestry of the immigrant progenitors of the FULLER family in America has been clearly traced to the Fullers of Redenhall, Norfolk, England, which was about 25 miles from Yarmouth, the English home of John Robinson, prominent elder and pastor of the Pilgrims. A very full account of the Redenhall Fullers may be found in New England Historical and Genealogical Register, vol. 55.


I. Edward FULLER, who with his family and his brother Samuel, came to Plymouth in the Mayflower, 1620, was the son of Robert Fuller, a butcher of Redenhall, Norfolk, England, where he was baptized 4 Sept. 1575. Undoubtedly the family had heard the preaching of John Robinson, which probably accounts for their joining the pilgrimage to a new land for the sake of religious liberty. It is thought Edward joined the company at Southampton, in August of that memorable year. Robert FULLER, the father, is recorded as having made a contribution towards the purchase of the sixth of the famous chimes of eight bells in the church at Redenhall, in 1588.


With Edward FULLER came his wife and small son Samuel, another son, Matthew, at least, being left behind 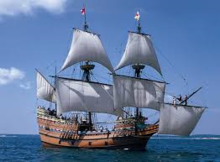 in Holland, who followed to the new home in America in a later expedition. Edward was the 21st signer of the agreement or "Compact" which was drawn up in the cabin of the Mayflower shortly before the landing on Plymouth Rock.


Neither Edward nor his wife was destined to long endure the hardships and privations of the first winter on these shores, and both died before spring, he between 11 Jan. 1620 and 10 April of that year, and she after the former date.[1] Edward had two sons, Matthew and Samuel. Joseph Smith, Jr. is a descendant of both sons.

II. Matthew FULLER, was born in England 16 October 1603. He did not embark in the Mayflower with his parents, but came with a later group of emigrants to the new colony, appearing on record there in 1640, as head of a family. In 1642 he had land assigned to him, was juryman, and propounded as freeman. The following year he was appointed sergeant of the military company raised in Plymouth, Duxbury, and Marshfield, of which Myles Standish was captain.


In 1650 he was living in Barnstable, where he followed the profession of physician, the first on record in that locality. In 1652 he was lieutenant of militia at Barnstable, and the following year elected as representative to General Court. In 1654 he appears as lieutenant under Captain Standish of the fifty men raised as Plymouth's quota to expel the Dutch from Manhattoes. As peace between England and Holland was declared before this force departed he saw no service. In 1658 he was elected to the Council of War, and in 1671 was its chairman and lieutenant of force to quell the Saconet Indians. In 1673 he was appointed surgeon general of the Colony troops. In 1676 he was captain in King Philip's War.


Captain Matthew Fuller died in 1678[2], his will, written 20 July of that year, being admitted to probate on 30th of following October. His wife, Frances, was named as executor, and the invoice of his properties estimated them at £667.04.66. Colonial wills are always exceedingly interesting because of their quaint wording and spelling, and in addition, are valuable sources of information regarding the personal and relationships of families. Captain Matthew Fuller's will is particularly rich in these particulars, and is given in full in Mayflower Descendant 13:7,11, from which the following extracts are presented:

Most of these legacies were bestowed with provision that they were to be received "after ffrancis my wifes Decease." The will was "Signed: Matthew ffuller and a seale," in the presence of Joseph Laythrope and John Haws. An interesting sidelight connected with this inventory and estate is the following, quoted from Mr. Amos Otis in his Genealogical Notes of Barnstable Families, and appearing in Items of Ancestry, I.M.R., 65. Among the items in Capt. Fuller's inventory is the following: "Pearls, precious Stones and Diamonds, at a guess, £200." In connection therewith a marvelous story is told. Soon after Capt. Fuller's death, the box of jewels is missing. A Scotch servant was accused of the theft. There was no proof, only suspicion. The charge so affected him that he abstained from food and soon died of grief and starvation.


He was buried in a grove on the northeast slope of Scorton Hill. When he died it was winter, and deep snow lay upon the ground. His body was buried at this spot because the deep snow prevented his neighbors from carrying it further. For nearly two centuries the plow has spared the turn which covers his grave. To this day it is pointed out and timorous people dare not pass it after dark. Many fearful stories are told of its apparitions of the Scotchman, and wayward children have been frightened into obedience by threats of appeal to the Scotchman's ghost in aid of the elders' commands. Recently stones have been placed, on at the head, and another at the foot, of the lonely sepulcher.

II. Samuel FULLER was born in England, and came in the Mayflower with his parents in 1620, but was left an orphan that first winter. Among the other passengers on the ship were his uncle, the renowned Doctor Samuel Fuller, who was able to render such valuable service to both Plymouth Colony and the Massachusetts Bay Colony in their fights against epidemics and heavy mortality due to the privations of pioneer life, and his aunt Susanna WHITE, who, left widowed that first winter, later became the wife of Edward WINSLOW, and the "first lady" of the plantation.


Young Samuel made his home with these kind relatives. At the division of land in 1624, Samuel was counted for three persons -out of respect for his parents. In 1634 he was made freeman of the Colony, and about that time removed to Scituate, where he was married, 8 April 1635, "ye 4th day of the weeke," by Captain Myles Standish, of Plymouth, to Jane, daughter of the Reverend Mr. John Lothrop, who was then in charge of the church at Scituate.


Samuel Fuller was called "a man of Kent" at Scituate, and his house stood north of Greenfield, on the first lot abutting on Kent Street. Besides this he possessed twenty acres in another section of the settlement, and other property.[3] Upon the death of his uncle, Samuel Fuller was made executor of the latter's estate. In 1641 he was constable at Scituate, and in 1643 listed among the "males able to bear arms" in that settlement.[4]


In 1644, Samuel was admitted an inhabitant of Barnstable, where he lived until his death, which occurred 31 October 1683. His will, which was exhibited in court 5 June 1684, mentions "eldest son Samuel,...son John,...daughters Elizabeth Taylor...Hannah Bonham...Mary Williams...and Sarah Crowe...," and to the son John he leaves his "Great Bible."[5] With other curious and interesting wills of Plymouth Colony, it is filed at Plymouth. Samuel Fuller was one of the last survivors of the Mayflower passengers. His wife preceded him in death.

III. John FULLER was born at Barnstable, 1656. He was commonly referred to as "Little John," to distinguish him from his cousin, Doctor John Fuller. He married in 1678, Mehitable, daughter of Moses ROWLEY and his wife Elizabeth FULLER, said Elizabeth being an own cousin of John's. Mehitable was born 11 Jan. 1660, and on 30 Sept. 1688 was admitted to the Barnstable Church.[8] On 21 Oct. of the same year she brought her three sons to be baptized, an on 19 May 1689, a daughter, Thankful, to be likewise christened.


"Little John" Fuller and his family lived on his father's estate at Sorton Neck, Barnstable, until they removed to East Haddam, Connecticut, in 1694, where he became a prosperous and well-to-do farmer, conveying in 1721, lands and farming implements to each of his sons.


John Fuller died in March, 1725, his will of 28 Feb. being probated on 10 May of that year. In it he describes himself as being a resident of the "township of Haddam, Hartford, upon the east side of the Great River." His wife died about 1732.

IV. Shubael FULLER, baptized at Barnstable, Massachusetts, 21 Oct. 1688, removed with his father's family soon afterwards to East Haddam, Connecticut. He married 8 Dec. 1708, Hannah, daughter of Jonathan and Hannah (Howland) CROCKER, born 26 Mar. 1688, at Barnstable.[9] From the records of deeds it is shown he owned land in the parish of Middle Haddam, near the East Haddam line. This settlement was later called Middletown, and, since 1767, Chatham. His death, which occurred 29 May 1748, is recorded at East Haddam, where his wife's name appears as church member since 29 Jun. 1712, and where his children were baptized.[10]

V. Lydia FULLER was born at East Haddam, Connecticut, 1 Sept. 1709, and married there to Daniel GATES[11] It is interesting to note that Lydia Fuller is fifth from the immigrant Edward in the Matthew line, and fourth in the Samuel family Line.


See GATES biographical sketch for continuation of that line.