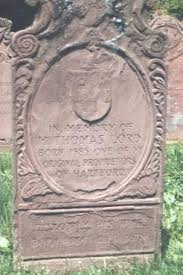 "The name is derived from the Anglo Saxon ord, contracted from ored, a governor, with the prefix L', le, denoting the person or place. The Gaelic ard, ord, high, lofty, the prime chief, superior. Lord has also been derived from Hlaford, which is compounded of blaf, a loaf, and ford, to give, a bread giver."


I. Thomas LORD, immigrant ancestor in the line here traced, was born about 1585, son of Richard Lord and wife Joan, of Towester, county of Northampton, England, husbandman. Richard Lord's will dated 30 May 1610, was probated the 7th of February next, and is filed in the Archives of North Hants, Second Series, Second Vol. V, folio 38.

two small horns or, the dexter wing outside gules, inside argent; the sinister outside of the last, inside of the third.[1]


Thomas Lord married Dorothy BIRD, born 1589, daughter of Robert Bird, of Towcester. Their marriage occurred 20 February 1610, and the record of the license issued is found, in the Marriage License Book of Peterborough, nearby.[2] Thomas Lord embarked from London, England, in the Elizabeth and Ann, Captain Roger Cooper, which left that port 29 April 1635.[3] He was at the time 50 years of age, and his wife, Dorothy, was 46. With them were their children: Thomas, 16; Ann, 14; William, 12; John, 10; Robert, 9; Aymie, 6; and Dorothy. Other passengers on this trip were Clement Chaplin, Christopher Stanley, William Swayne and others, who became prominent in the settlements of New England.[4]


In the "but," adds one writer, "that may have been a godly deception."[5] In this country, at least, he was known to be a merchant and mill owner. Upon arrival at Boston, he joined for a year or two, his eldest son, Richard, who had preceded his parents to New England some two or three years earlier, and was living at Newton, now Cambridge, Massachusetts. In 1636, in company with Reverend Mr. Thomas Hooker and his party of one hundred followers, he crossed the wilderness and became one of the founders and original proprietors of Hartford, Connecticut.[6] His home lot in 1639 was on the highway, on the bank of Little River, now Wells Street.[7] Twenty acres were allotted to him on 3 March 1640.


The emigrant Thomas Lord died at Hartford, in 1667, and is buried there. His name is inscribed upon the monument in the old Center Church Burying Ground, which was erected in memory of the founders of the city. His widow, Dorothy Lord, died 2 August 1676, at Hartford. Her will, which was dated 8 February 1669, is found in the probate records in the office of the Secretary of State, at Hartford[8]. The document was scaled with the seal of her late husband.[9], "the armorial bearing thereupon depicted corresponding exactly with the Arms of the De Laward, alias Lord, as given in English heraldry."[10] This circumstance seems conclusive proof of the Norman origin of the immigrant.

"It is surprising to find how few New England settlers, known to have belonged to heraldic families, transmitted their arms and history to descendants. Either the emigrants on leaving lands, social and civil distinctions in the old country for the primitive and bare condition of life in a new country, cared little for the mere insignia which had pertained to the former more artificial surroundings, or, else their children, in their struggle for existence, took no interest in armorial devices which represented to them so little, and seemed so useless in their changed conditions."

Another factor may have entered, viz, that many of the earliest immigrants came here under pressure of persecution in their English homes, and were very intolerant, therefore, of anything which tended to remind them of the oppression which the upper classes, or nobility, bad sometimes wielded over those less fortunately born. Indeed, at one time it was considered disloyal to the commonwealth built up on these shores by such sacrifice and privation, for anyone to be found in possession of insignia, coat of arms, or other badge of superior position "back home."

II. William LORD, born 1623, in England, came with his parents to New England in 1635. He settled in Saybrook, Connecticut, in 1645, and was granted land at the division of 1648. He was among the early settlers of Lyme, which was set off from Saybrook in 1665.[18] In Lyme records is found the following: "Chapeto, Sachem made a deed to William Lord, sen. of Saybrook, April 6, 1669. It was confirmed by his sons in 1681." A part of the tract thus purchased from the Indians was, in later years, exchanged by his sons Richard and Robert for smaller tracts, which they deemed more desirable, and descendants of Thomas and Richard Lord continued to occupy a part of it until a very recent date.[19]


William Lord also obtained for the town of Lyme the large tract of land which afterwards made the town of Salem.[20] He served as deputy to the General Court[21], was an eminent merchant, a large landowner, and was engaged in various commercial enterprises on quite an extensive scale. His name is mentioned as one of the lookers on in the famous trial of Cussaquine, for wounding Uncas, the faithful friend of the English settlers.[22] Of him it has been written: "William Lord must have been a man of unusual character, for he has been classed with Gardiner, Winthrop, Higgirlson, Whittlesey, Griswold, and Kirtland." [23]


When very young he married a first wife, whose name seems to have been elusive. Albert Mack Sterling, in Sterling Genealogy [24] calls her Dorothy, and says they were married about 1642. Some one in the Boston Transcript [25] has given the name as "Hattie Nickerson." She bore him seven children, between October 1643 and September 1656. In June, 1664, he married (2) Lydia, daughter of William and Mary(Bosworth) Buckland, of Hingham, Massachusetts, and widow of John Browne, jr., of Rehoboth, who had died 31 March 1662[26], just, ten days before the death of his father, John Browne, sr., magistrate, commissioner, etc., the eminent brother of Peter Browne, a signer of the Mayflower Compact on board that historic vessel.


According to a writer in Boston Transcript[27], Lydia Buckland had been, the second wife of John Browne, jr., as shown by Rehoboth records dated 12 July 1682, wherein James Browne, above mentioned, brother of John, jr., states: "My mother, Dorothy Brown, died and left a will dated December 7, 1668, proved March 29, 1674, in which she left to my loving nephew, John Brown, her grandson and eldest son of my deceased brother John Brown, by his first wife, one half of all the lands my father had given her." Another writer in the Transcript[28] says: "The concensus of opinion seems to be that the first wife of John Browne, jr., was Ann Dennis, and she must have died soon after the birth of her son, John Browne, in 1650, and after her death, John married Lydia BUCKLAND, daughter of William and Mary (Bosworth) Buckland. Of the sons of William Lord it has been written: "It is a peculiar fact that the elder sons of William Lord seem to have waited until well past thirty before they married. His son Thomas was about forty eight at the time of his marriage." [29]


William Lord died at Lyme, Connecticut, 17 May 1678.[30] The compiler has found no record of the death of Lydia, his wife. Concerning their children, dates are lacking. Several writers mention their sons, and add "and three other daughters."[31] The authors of Family Histories and Genealogies, Salisbury [32] mention one as Sarah, and the compiler of Bosworth Genealogy gives the names of the three as Sarah, Dorothy and Abigail, the latter of whom married Ebenezer Skinner.[33] Sergeant Ebenezer Skinner, born in Malden 1684, married Abigail, daughter of William Lord and Lydia (Brown) Lord. Her mother, Lydia Brown, was, as is supposed, the daughter of John Brown, jr., of Rehoboth, and granddaughter of John Brown, the distinguished magistrate, assistant, and commissioner of the Plymouth Colony. Her father, William Lord, of Saybrook and Lyme, was born in England, 1623, and came with his father, Thomas Lord, in the Elizabeth and AnnItalic text in 1635.[34]
The very evident error in this statement in regard to the identity of Lydia Browne, alleged mother of Above Abigail Lord, renders it probable the writer was also mistaken in the identity of her father William Lord died in 1678; therefore Abigail, if his daughter, was born some seven years before Ebenezer Skinner, possible, but not probable.


From the evidence it seems reasonable to believe the above Abigail Lord was of other parentage than that indicated in above citation. The eminent genealogist, Honorable Ralph D. Smythe, is one authority for naming one of these daughters as Hannah, who married John Maltby [35], and the Honorable Francis Parker, of Hartford, who has made an intensive research into these family lines, is another. In a letter to the compiler, dated 5 August 1922, be says:

"In June, 1664, William Lord married, secondly, Lydia (Buckland) Browne, daughter of William Buckland, of Hingham, Massachusetts, and widow of John Browne, it., of Rehoboth, by whom he had seven children, the eldest born March 30, 1666. The three youngest were daughters whose birth dates were, never recorded. All three were born between 1670 and 1678. Their names were Dorothy, Elizabeth, and Hannah. Which was the eldest is not known. Dorothy married John Hopson (shown by deed record not found). Elizabeth's marriage not found. Hannah married John Maltby, August 13, 1696, and settled in Saybrook, where they were living in 1710, but seem to have removed before his death in 1727."

CHILDREN of William and Dorothy:

CHILDREN of William and Lydia:

CHILDREN of John Browne and Lydia

III. Hannah LORD was one of the “three youngest daughters" mentioned among the children of William Lord, of Saybrook. Her marriage to John MALTBY occurred in August 1696, and is on record in the court of probate, District of Saybrook, old town records.[42] There the births of their children are also recorded.