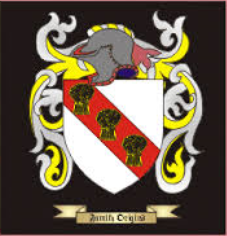 COATS OF ARMS of the Maltby family are found as early as 1097, in Yorkshire parish registers[1], and have descended to the American members of the family. In the inventory of Samuel, son of our immigrant, mention is made of the family coat of arms.[2] Crozier describes the arms of William Maltby, of Branford, 1667.[3]


I. The children of William MALTBY is quite clearly traced to John Maltby, early of Kexbie Hall, Kexbie, Lincolnshire, England, whose will was proved in 1557.[4] William and brothers John and Robert came to New England, all three apparently to New Haven and Branford, Connecticut. Of these the eldest was John, born about 1640, who is first of record in June 1664, at New Haven.[5] In 1662, we find him selling his property in East Retford and West Retford, Babworth, Nottinghamshire, England, at about which time his father left his houses in Briggate, East Retford, Carr Lane, close in Little Soringley in Clarborough, to his youngest son, Robert, lately born.[6] These Maltbys had relatives in Yorkshire. The following year no Maltbys were assessed in that locality, showing a complete removal of the family.[7]


This John Maltby was evidently engaged in West Indies merchant trade, and made trips to London, upon one of which, it is supposed, he brought his two younger brothers, William and Robert, to New England with him. In a letter received by the compiler from Dorothy Lord Maltby Verrill, author of The Maltby Family, dated 28 September 1928, she writes: I wonder if you would like the following for your book? It has never been published, and if you feel you could give me credit for it, I should appreciate it. It is the marriage record of the parents of William Maltby, emigrant. (I may say that since my book was published there is no "supposed" about the Maltby ancestry.) "The Nottinghamshire Marriage Licenses,[8] 1632, May 22, John Maltbye of East Retford and Mary Williamson of Habellstrope (Habblesthorpe) Spinster, at East Retford” Habblesthorpe is now called Leverton, Notts. Anciently called Apethorpe.


William Maltby had probably been married in England, for when he appears in New Haven, records of 1672, he had children Jane and John with him. Prior to this, however, we find his name in a signature to the New Plantation Covenant in Branford, 20 January 1667.[9] The name of this wife is most likely Rachel Williamson. William Maltby came to New England with the rank of "gentleman." He is referred to, throughout many town records, with the titles of respect, such as Master, judge, Esquire, etc. Indeed, in 1703, a special court at New Haven issued a license to "ye Worshipful Mr. William Maltby, of Branford." This title was not used in the Colonies prior to 1685, and then, and subsequently, usually applied only to governors. Next in degree, of honor was the title, Esquire; then Gentleman, which was soon discarded in Connecticut. "Mister" was accorded to all gentlemen, including those of ten given higher titles.[10] On 16 May 1673, William Maltby was made "cornet" of troops.[11] This corresponds to what is now termed "lieutenant." The next year he was chosen constable[12], and for two years, collector.

CHILDREN of William and Abigail:


Mr. Ralph D. Smyth, a careful historian, writes of him in a letter dated 1866: "He was a cooper, but belonged to the better class in society. . , He lived in Saybrook all his life, and died in August 1727, aged 57". Mr. Smyth doubtless got his authority for the dates from the tombstone in Saybrook, which has long since vanished through decay.


John Maltby married at Saybrook, Connecticut, 13 August 1696, Hannah LORD.[18] She was the daughter of William and Lydia Lord. His will, dated 11 March 1727, was proved 12 September 1727, and mentions his wife Hannah, and all his children except William. He gave each daughter a share in his "mansion house." There is an interesting old Maltby chest, which belonged to Hannah, daughter of John. There is strong probability that it was made by himself or son, since they were coopers. This chest has a fanciful design upon it, branching, feathery sprays entwining about a shield bearing the initials "I M" and the date, 1726. The "I" was doubtless the old fashioned "J." This old relic cf a distant past has been the center of attention upon many occasions when the descendants of the Maltby pioneers have gathered together, and it inspired the following poem, by Seraph Maltbie Dean, of Cambridge, which, with a change of name and particular reference, might well serve to express the emotions with which many descendants of other early ancestors view their precious heirlooms.

Quaint heirloom, as alone this day you stand a relic of the past, what could you tell Of our ancestors, and the home and land From whence they came, and of one, as well, Who formed you for his own utility, with somewhat, e'en, of skill and artistry?


In red and black and gold, traced clearly, see The letters, and the date, which seem to give An index of the owner's family, As well as time in which the man did live John Maltby, grandson of the one we own As sire of Maltbys in our lineage known.


This much we gather, but no further clue From which to unroll the years between That early date and this, is given by you; Nor may we ever know all you've seen, Made, as you were, full half a century Before our country's independency!


You know the natives who tried souls of men; Witnessed privations, loss, disease and death; 'And, midst these scenes, saw the empire rise and gain Of a new Nation, ever to Freedom's breath A Nation known this day, her treasures sought By all lands, and we cry, What God hath wrought!


Yet,pride and honor, wealth and fame must pass; Not e'en a nation can unchanged remain; The things we value, in an instant's flash, Are gone from us, we must new treasures gain! But still, with you, Old Chest, to our beloved Tree,The Maltby genealogy cling we! –Maltby Family, 269.