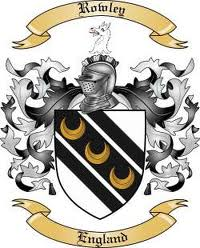 The name ROWLEY is derived from the Saxon words row, sweet, and lay, a field. Roilly is near Evreaux, Normandy. Ralph de Roilly came over with the Conqueror, and held Stockland, Devon, in 1083. The name is traced to the time of Edward II, when Randolph de Rowley was seated at Carmichan, County Chester. Some American members of the family claim descent from William Rowley, noted dramatist in the time of James 1.[1]


I. Henry ROWLEY was in Plymouth, Massachusetts, as early as 1632, coming, it is surmised, with Mr. Timothy Hatherly in the Charles.[2] He was one of the original settlers of Scituate, a freeman in 1633, and with his wife joined the first church there, 1635. He removed to Barnstable with Annable, Robinson, Fuller, Reverend John Lothrop, and others, at the forming of the church which was there "gathered" in 1639. Henry Rowley took his place among the sturdy pioneers of these early settlements, discharging the duties of various offices bestowed through the confidence and esteem of his fellow citizens. He was constable in those days, an important and most honorable position - surveyor, and representative to General Court in 1634, 1643, and 1650.


His first wife, whom he married in England, is said to have been a daughter of William PALMER, an early comer to Plymouth. The latter, in his will of 7 November 1637, couples the names of "Rebecca my grand child and Moyses Rowly whom I love," and asks his executors, who were his "loving friends Mr Wm Bradford Mr Edward Winslow & Mr Thos Princ" to see that "yeong Rowly be placed with Mr Partridge" (minister at Duxbury) that be might be "brought up in the fear of God, and to that end if his father suffer it," he gave Mr. Partridge five pounds.[3] It is likely this first wife of Mr. Rowley's died before be came to America. He is taxed at Plymouth in January 1632[4] and there married (2) the following 17 October, Francis, "the late wife of Tho: Blossome."[5] In the tax list of Plymouth for January, 1633, his name is found, again, but in the listing of "Males" in the Colony who, in 1643, were "able to bear arms," he is found among those at Barnstable.[6]


Concerning Francis(Blossom) Rowley, data seems meager. Thomas Blossom was of Plymouth as early as 1629, having a family with him. He died before 2 January 1632, when Francis was taxed as "Widdow Blossome."[7] He left, perhaps besides other children, two sons, Thomas, who married in 1645 Sarah, daughter of Thomas Ewer of Charlestown, and Peter, who married on 4 June 1662, Sarah, daughter of Robert Bodfish of Lynn and Sandwich, mentioned elsewhere.[8]


Of the children of Henry Rowley records seem vague, but Mr. Savage mentions three. There was also a Thomas Rowley, of Windsor, Connecticut, who was freeman in 1669, married 5 May 1669, Mary, daughter of Henry Denslow (an ancestor of Emma Hale), and died 4 August 1708. Whether or not he was a son of, or related to, Henry Rowley of Barnstable, is not apparent. The inventory of the estate of Henry Rowley was filed with Plymouth Colony Wills and Inventories, vol. 111, fol. 1, page 93. A copy has been printed in the Mayflower Descendant 24: 137, and is of interest:

A true Invendory of the estate of Henery Rowley of Saconeesett Deceased exhibited to the Court held at Plymouth in July 1673 on the oath of Moses Rowley as followeth: Item a Debt of twenty nine pounds Due from jonathan Hatch upon the Repurchase of a p’sell of land which the said hatch sold to the said Henery Rowley with that limitation provided.

II. Moses ROWLEY was probably born in England, and came with his father to Plymouth in 1632. As before mentioned, he is named in the will of his grandfather, William Palmer, who placed a legacy in the hands of the Reverend Mr. Partridge for the purpose of bringing the lad up in the fear of the Lord. Hughes, in American Ancestry 3: 191, calls him the second son of his father, and says he was a freeman at Barnstable in 1657, a surveyor, and represented Suckonessett (Falmouth) in General Court in 1692.


On 22 April 1652, at Barnstable, Moses Rowley was married to Elizabeth, daughter of Captain Matthew Fuller, also called Doctor, because of his services as surgeon and physician in that settlement. The latter in his will of 25 July 1678, speaks of his daughter Elizabeth, the wife of Moses Rowley; of Sarah, the daughter of Moses Rowley; and of "Moses Rowley, seni my sone in law."[11] "Under the new charter" he removed to East Haddam, Connecticut, and there died in 1705.

III. Mehitable ROWLEY, born at Barnstable, Massachusetts, 11 January 1660, married about 1678, "Little John" Fuller, son of Samuel Fuller, who, with his father Edward, came to Plymouth in the Mayflower, 1620.


See FULLER sketch for the biography and continuation of this family line.