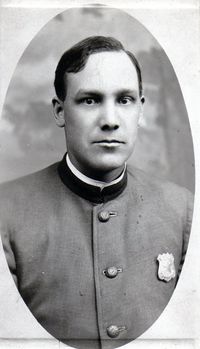 John Gibbs Smith, second son and third child of Hyrum Fisher Smith and Annie Maria Gibbs [Smith], was born in Brigham City, Box Elder, Utah on September 1st, 1883. He was born in the old rock house of his maternal grandparents, John Gibbs and Mary Catherine Langton [Gibbs]. His family, then consisting of father, mother, a brother [Hyrum Gibbs Smith], and a sister [Mary Helen Smith] were living on a ranch in Portage, Box Elder County, Utah at the time, and as the town of Portage was near the home of his mother’s parents, she went home to her mother to have her third child. He was named for his two grandfathers, [Patriarch] John Smith and John Gibbs. The “Old Rock House,” as we call it, was built by his grandfather Gibbs in about 1858 and still stands and is currently owned and lived in [1972] by a member of the Gibbs family, Elmer (Finn) Gibbs and family." - Ralph Gibbs Smith