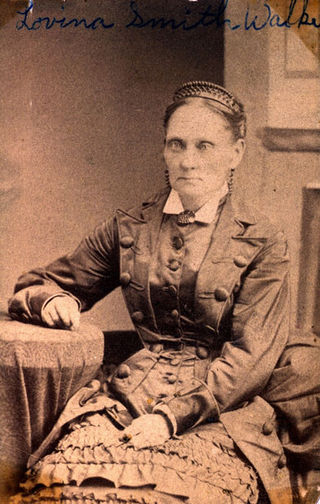 Lovina stood by the bed upon which lay the mortal remains of her mother, Jerusha. She was just 10 years old (born September 17, 1827), in Manchester, New York. While she felt abandoned, she was not really alone; Grandmother Smith and Aunt Emma were there as was Aunty Hannah. Aunty Hannah was not really her aunt, but a wonderfully kind, loving lady who had come into the home to help at the birth of her sister Sarah just two weeks before. Her Father arrived home in early December to find Aunty Hannah and the children waiting for him.


At the suggestion of his brother, the Prophet Joseph Smith, Hyrum Smith briefly courted Mary Fielding and the couple married on December 24, 1837. In January 1838 her Uncle Joseph and his family had to flee Kirtland and her father with his family left in lat March, arriving in Far West, Missouri, after a horrible journey of a thousand miles through mud and rain.


Life had just begun to settle down for Lovina when her Father and Uncle Joseph were arrested by the Missouri militia and hauled off to jail. Hyrum's family finally left the state in February 1839 and crossed the frozen Mississippi to the comparative safety of Quincy, Illinois. Hyrum and Joseph were able to escape to Illinois in April, and Hyrum found his family in Quincy and soon they moved up the river to a new place to be called Nauvoo.


Life in Nauvoo was wonderful for Lovina, who turned 12 in the fall of 1839. She had many friends and among those friends were several young men, but primarily Lorin Walker. Lorin's mother had died and his father went on a mission so Lorin was living with her Uncle Joseph and Aunt Emma, where he served as an aid to Joseph, caring for the horses and doing other odd jobs. Lorin had a special relationship with Joseph, who called him "my Edwin."


In December 1843 her Uncle Joseph and Aunt Emma held a grand ball for the youth of Nauvoo. She had a wonderful time and go to dance many dances with her favorite beau, Lorin Walker. Yet there was another who demanded much of her attention that day, a young man who had just recently come to Nauvoo and was not a member of the Church, Joseph Jackson. Not long after the grand ball, Joseph Jackson went to Hyrum and asked for Lovina's hand in marriage, which Hyrum refused. Not content with that answer Jackson went to the Prophet Joseph and asked him to intercede and was again refused. Jackson then went to Carthage, where he and others conspired to kidnap Lovina, a plan that did not come to fruition. But Jackson remained in Carthage, stirring up hatred for the Saints and was a contributor to Joseph's and Hyrum's death.[1]

Lorin proposed marriage to Lovina, which she accepted, and they made plans for a fall wedding. In June came the episode of the Expositor press. On Saturday, June 22, 1844, Joseph and Hyrum left Nauvoo hoping to defuse the situation and returned home on Sunday, June 23. During their absence, Lovina and >Mary came to the conclusion that if Lovina wanted to be sure her father would be there for the wedding, they should proceed quickly. As Hyrum and Joseph were returning home, Lovina went out to greet them. Joseph, who loved to tease his niece, asked her,

"Lovina, when are you going to get married?"
"We're just waiting for you, Uncle Joseph."
"Go get your beau."

So she did and they were married the evening of Sunday, June 23, with the family gathered around and Aaron Johnson, a neighbor and friend, officiating.[2] The next day Joseph and Hyrum left for Carthage. Earlier Joseph had charge Lorin with the responsibility to take care of Emma if anything should happen to him, so now Lorin and Lovina became residents of the Mansion House with the responsibility of helping Aunt Emma and Grandmother Lucy. During the days that followed, Lovina was there by the side of her Aunt Emma. When the news of the Martyrdom came, Lorin and Lovina were in the midst of the preparations for the funeral and participated in both funerals, the official one and the private one later in the night.

As the Saints prepared to go west, Lorin remained as they had promised to help Emma. Lovina had to watch Mary, her brother and sisters, Aunty Hannah and others leave without her. In December 1848 Emma married Major Lewis Bidamon. Lorin and Lovina stayed on for a while, but in 1850 they moved to Macedonia (currently Webster), where Catherine, Sophronia, and Lucy, Lovina's aunts were living.


In the spring of 1856, Lorin's brother, William found Lorin and Lovina in Macedonia as he was returning home 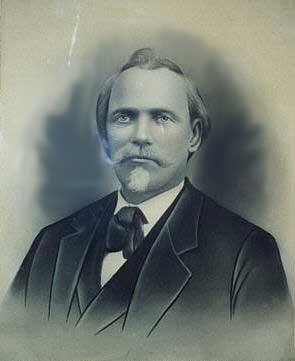 from a mission in South Africa.[3] William had a commitment to go to Iowa City to help in outfitting the pioneers for the westward trek, and Lorin and Lovina, with their family of four children, accompanied him. By the first of June they were preparing to shut down the camp and proceed west themselves when they received a surprise - James Willie arrived within 300 immigrants and reported that Edward Martin was coming with about 400 more, all intent on reaching the Valley that year. In mid-June they watched the Willie Company and finally the Hodgetts and Hunt wagon trains. By this time it was too late in the year for the Walkers to try to make it to the Valley, so they proceeded to Florence to spend the winter.


They first built a willow house for the winter by driving posts into the ground every 5 or 6 feet, then weaving willows back and forth around the posts. When plastered with mud and roofed with willows and prairie grass, it made a snug home until spring came and the roof started to leak. By that time there were houses available in Florence.[4] In the fall of 1859, Lovina's brother John, then the Patriarch to the Church, came east to visit family. He spent the winter visiting with Emma and others. In the spring of 1860 he was put in charge of a wagon train which included Lorin, Lovina, and their six children.


Traveling with a wagon train was basically boring, hard work as they walked mile after weary mile next to the lumbering ox-drawn wagons. One day Lovina's six-year-old daughter, Edwina, was riding in the wagon and decided to get down and walk. Lovina looked up just as Edwina lost her balance and jumped awkwardly. Her leg twisted as she landed, destroying her knee. They managed to straighten and splint it, but she walked on crutches for the rest of her life.[5]


One evening in the hills of Wyoming Lovina's son, John, decided to see if he could get a rabbit to help with the dwindling food supply. Lovina heard the report of his gun and hoped for his success, but her heart dropped as she saw him staggering towards camp with blood dripping from his left arm. He had slipped just as he was preparing to shoot and the gun discharged, injuring his arm.[6] they treated it as best they could, but felt that he should get to proper medical aid as soon as possible. The next morning Lorin was left in charge of the wagon train while John took his mule-drawn wagon and with Lovina and the wounded youth headed as fast as possible for Salt Lake City. They made it there in a week and were able to save his arm. The wagon train came into town eight days later and there was a joyful reunion.

The Walker family settled in Farmington, where Lovina lived out the remainder of her days, dying on October 27, 1870.