Varying forms of this name are Tuttle, Tuttel, Toutle, Tuthill, and Totyl. The name comes from the ancient 'tothills' of England, meaning Hills of God. Locally, an ancient town in Caernarvon, on the coast of Wales. The word tuthill signifies a conical hill, the name being given to a number of locations in England in early times.[1]


The permanent seat of the family in England was in Devonshire. A family pedigree, date 1591, begins with William TOTYL, who was Lord Mayor of Exeter, in 1552. He was the father of thirty-six children, by three wives, though only one marriage seems to be on record -- that to Elizabeth Matthew, of Vorganwg, Wales.[2] The coat-of-arms which descended to our immigrant is described in Crozier's General Armory (129). William Tuttle was from the Devonshire Tuttles, and the coat-of-arms belonging to this family, with its crest showing a hill upon which stands a dove with an olive branch in its mouth, is considered one of the most beautiful in heraldry.


I. William TUTTLE, husbandman, left Gravesend, England, in April, 1635, and landed at Boston, Massachusetts, about July 1, that year.[3]. In the old shipping lists kept in London, is found this entry: Emigrants to New England, passengers in the Planter, Nicholas Travice, Master, having brought certificates from the minister at St. Albans, Hertfordshire, and attestation from the justice of the peace, according to the lord's order, Signed, Richard Fenn, Alderman. Among the names of the passengers appear those of: Wm, Tuttell, husbandman, age 26; Elizabeth Tuttell, age 23; John Tuttell, age 3½; Ann Tuttell, age 2¼; Thomas Tuttell, age 3 months. In the passenger list, William Tuttle is called a husbandman. The distinction between a husbandman and a farmer was the husbandmen owned the land he lived upon, while the farmer rented from others. This would show William and Elizabeth were probably not without means when they came to the new country. A petition on file in Boston calls him a merchant. Embarking with William Tuttle in the ship Planter, were his two older brothers, Richard and John. The former remained a resident of Boston, but John returned to England in 1652 and died 30 December 1656 at Carrick Fergus, Ireland.


William was first a proprietor of Charlestown, Mass., where in 1635 he was given permission to build a windmill. In 1636 he became a proprietor of Boston, where on 24 July that year, his wife joined the church, and on 2 July 1637 brought son Jonathan to be baptized, and on 7 April 1639 son David. That spring they removed to New Haven, in time to help frame and sign the Colony Constitution in Mr. Newman's barn on 4 June that year. In 1640, we find his first official act was in the capacity of Commissioner, to decide an equivalent to those who had received inferior meadow lands such as watchings, trainings, arbitraments between contending settlers, fixing boundaries of farms and towns, adjusting difficulties of dissatisfied neighbors, road commissioner, constable and juror, he was a man of courage, enterprise, intelligence, probity and piety, a just man whose counsels were sought and judgments respected.


In 1656, William Tuttle bought of Joshua Atwater his original allotment, mansion-house and barn, with certain other lands recorded in the proprietors book. In 1717 this property was sold to the trustees of the collegiate school, and the first college building was placed upon this spot. It received the name of Yale College, the name given out of compliment to Governor Elihu Yale, who was, in those years, a large financial contributor to the educational enterprise. 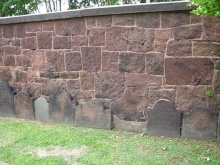 The dust of William and Elizabeth Tuttle mingles with the sod of Old Green Cemetery. In 1821 her gravestone was removed, with others to Grove Street Cemetery, and stands in the row along with north wall of that God's Acre. A part of the inscription is still plain, a part obscure, and a part gone. No stone still exists for William. There are very few extant 1600s stones in Connecticut. This is the general area of Tuttle stones which were removed from the New Haven Green and put in loose alphabetical order on the North Wall in the late 1800s.

He came over in the ship "Planter," Nicholas Travice, master, in April, 1635. The passenger list of that vessel contained twenty-five names, seventeen of whom were Tuttles (or Tuttels) and represented three distinct families. The one in which we are here interested is known as the Devon branch, and the researches of George F. Tuttle, published in the family genealogy (1883) show a direct line of ancestors back through Richard Tuttle and Joan Grafton to William the Conqueror, and in the family record are the names of many of England's nobility. William Tuttle, the great-grandson of Richard Tuttle and Joan Grafton came over in the Planter, at which time he was twenty-six years old, was one of the founders of New Haven, Conn., in 1639. He is named on the passenger list a "husbandman," which indicated that he owned his land as well as tilled it. Other records show that he was also a merchant and that during the succeeding twenty-five years he purchased various properties, laid out roads, was prominent in founding churches and schools, and appears altogether to have been a leading spirit in the community. He was born in 1609 and died in 1673. His wife's name was Elizabeth, born 1612, and died December 30, 1684, aged seventy-two years. He came over in the ship "Planter," Nicholas Travice, master, in April, 1635.


Thomas Tuttle is named among the New Haven proprietors in 1685. He lived and died in that locality which is now a part of the Yale College Square. His lot, which he acquired in 1657, fronted on the square, and adjoined his father's on the south. The old Observatory stands on about the center of what was Thomas Tuttle's lot. "It fronted on Market place (Upper Green) nearly 170 feet, and extended back about half the square."[7] This lot was in possession of the Tuttle family for one hundred twenty-three years from 1657 to 1780. In 1797 is was sold to the College.


Thomas Tuttle left his homestead to his son Joshua, whom he made executor of his will, dated 6 May 1704, which was proved "2d Tuesday of November 1710". His death occurred 19 October 1710, his wife having died just four days before, on 15 October 1710. He bequeathed to his son Caleb his set of cooper's tools, and mentions his grandchildren Hannah, Priscilla, Abigail, Mary, and Abraham HOTCHKISS, and others.[8]


Caleb received land from his father, by deed, in 1702. "In 1739 he conveyed 20 acres in the 5th division to his son Thomas. In 1743 he bought land, which his children, eleven years later, 1754, sold, the conveyances being made by James, Enos, Timothy, Abraham, Mary (wife of Timothy Ford) and Eliphalet, of Litchfield."[10] Caleb Tuttle was prominent in the first secession from the First Church Society, a movement strongly opposed, but which gathered momentum until the Second Ecclesiastical Society in New Haven, now known as the North Church was organized. In 1744, a church was built, which was called the Blue Meeting House. When its bell was first hung, it could be heard, it is said, in more towns than any other bell in New Haven County. This bell was eventually taken to Cheshire, Connecticut and hung in the tower of the Episcopal Church there. President Stiles, in History of the Judges, says of Caleb Tuttle:

He was a plain, good man, whom I well knew, a man of integrity, very intimate with Governor Jones' son, they having married sisters... He was a zealous religionist, and warmly captivated with characters distinguished for holiness and piety, and, according to my ideas of the man, whom I well remember, he would, I should think, have listened to the anecdotes and history of these pious and heroic sufferers with aviditym, and curios and feeling attention. I doubt not he knew more abut the subject than all his posterity, and he is the source of information about the Whalley Stone.[11]

Mary Tuttle died 12 November 1723, and Caleb re-married 17 February 1725, Hannah, widow of John Todd, and daughter of John BUTLER, of Branford, Connecticut. She died 27 October 1748, in her sixty-fifth year. In 1751, Caleb Tuttle died, intestate, and his son Enos was appointed to administer.


On 15 April 1755 he enlisted in the French and Indian War, being enrolled in the Fifth Company, First Regiment, under Captain John Patterson, of Farmington, Connecticut. The pathetic end of his story is told in the entry on the records: Eliphalet Tuttle, soldier, enlisted April 15, Listed among the "dead and taken" November 10th.[12] Three months later, on 12 February 1756, a little daughter was born, whom the sorrowing, widowed mother most significantly named Submit. Desire Tuttle re-married Isaac COTTING.[13] In the distribution of the estate of her brother Joseph, in 1779, she is called Desire Cotting.


For continuation of this family line please see the LEWIS biography.