Who is E Wellington

In the Old Mormon Pioneer Cemetery on Parley Street, east of Nauvoo, Illinois, there stands a small triangular stone, its aged condition obvious, its inscription, "E WELLINGTON" is barely readable. Unless directed to it and specifically instructed regarding it, one would pass it by without a glance.


Who is E WELLINGTON? The full story of this woman comes to light after many years revealing a most interesting set of circumstances—and a peculiar connection to the family of Joseph Smith Jr., founder of The Church of Jesus Christ of Latter-day Saints, and his wife, Emma Hale Smith. E WELLINGTON, aka Elizabeth Millican Kendall Wellington, was, with her first husband, John Kendall, converted to the Church in England. At the time of their conversion the couple had two children, John and Isabella. The couple had made plans to migrate to America as soon as they could save enough money. Their plans were disrupted when John Kendall, who was a painter, fell from a scaffold, and was fatally injured, while attempting to save the others who were working with him. He died in Liverpool, Lancashire, England, 5 October 1842. A touching tribute regarding the death of Brother John Kendall was published in the Millennial Star in November 1842. 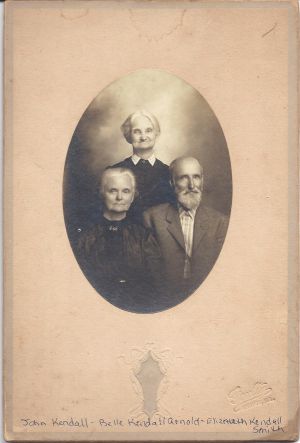 Kendall’s widow, Elizabeth Millican Kendall gave birth to their third child, Elizabeth Agnes Kendall, 7 May 1843, in Ulverstone, Lancaster, England. When the baby was a few months old, the widow, Elizabeth, took her three children and boarded the ship, Ketoka, heading for America, with a large number of Latter-day Saint converts. Elder John Ballantyne, a convert in 1842, from Scotland, was said to be in charge of the Saints on this journey. Among the names on the ship list are Elizabeth Kendall, 28, John, 7, Isabella 3, and Elizabeth, infant; their belongs were listed as "Boxes of Clothing, Utensils". The Ketoka set sail from Liverpool on 5 September, 1843, arriving in New Orleans on 27 October 1843.


The Kendall family made their way up the Mississippi River to St. Louis. Tradition in the family indicates she stopped at St. Louis for a time; then they continued on to Nauvoo. The exact date of their arrival in Nauvoo is unknown. Some have suggested they arrived there in February 1842, which is impossible, due to the facts previously reported herein. Clear documentation shows that the infant daughter, Elizabeth, listed in the ship list, was born in May 1843, arriving in America, in October of that year. Therefore, the Kendalls were in Nauvoo no earlier than the late Fall of 1843 or possibly in January or February 1844. According to family tradition, "Elizabeth and her family were first housed in what was called the Mansion House. It was the Joseph Smith family home which had an addition of guest rooms for visiting dignitaries. A widow’s section of the town was being built, and shortly she and her children moved to one of these quarters."


In a story, written by Vida E. Smith, a great granddaughter of Elizabeth Kendall, tradition states that the Kendalls boarded for a time at the Mansion House and was befriended by Emma, wife of the Prophet Joseph Smith. She and her children finally found lodging in a small apartment in Brick Row, or Widow’s Row, once located at the corner of main and Kimball streets in Nauvoo. Her room reportedly was the "third room from the east end."

Widow Kendall found work, (the nature of her work has not been identified); her work forced her to leave her three children alone all day while she was away. The older two were able to tend their little sister. There were others who were friends who helped out as well, though unnamed. That Elizabeth Kendall was a faithful member of the Church is evidenced by the Nauvoo Temple Records which state she received her endowment in the Nauvoo Temple, on 31 January 1846. However, when the majority of the Church members made their exodus to the west, Elizabeth and her little family remained in Illinois. According to Vida E. Smith, she endured deprivations at the hands of mobbers. It became necessary for her to flee from the city. In September 1846, when Emma Smith took her family upriver to Fulton, Illinois, Elizabeth Kendall took her children there as well.


A few months later the Kendalls returned to Nauvoo. At some point, Elizabeth was befriended by Matthias Wellington, whose family was engaged in farming and raising cattle in the vicinity of Nauvoo. Elizabeth Kendall and Matthias Wellington were married in Hancock County, Illinois, 25 February 1847. Her friend, Emma Smith also married in December that year and the friendship of Elizabeth and Emma continued. Elizabeth bore Matthias Wellington two children, Lydia Ann Wellington, born in 1847, and Thomas Wellington born in 1849. Sadly, Elizabeth Wellington died, perhaps in childbirth, 30 September 1850. Her death resulted in her youngest daughter, Elizabeth Agnes, nicknamed Lizzie, who was about 7 years of age, being left with her step father. Fairly soon, Matthias Wellington remarried; when his young wife became pregnant, she felt unable, or unwilling to continue looking after little Elizabeth Kendall, (Lizzie). The older Kendall children, John and Isabella, had already found other places where they were working for their own board; it became necessary to find a new situation for Lizzie. 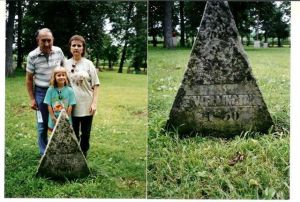 Elizabeth Agnes, was taken to her mother’s friend, Emma Smith Bidamon’s house, more than likely in about 1851 or 1852, undoubtedly with the expectation that she would be helpful, since Emma had just taken on the full time care of her mother-in-law, Lucy Mack Smith. In the 1860 Census of Hancock County, Elizabeth Kendall, listed as being age 17, was living in the Bidamon household. According to the family stories, Emma treated Lizzie as if she was her own daughter; and in a short time she became a daughter-in-law, when on 23 May 1861, she married Emma’s son, Alexander Hale Smith.


Knowledge of Lizzie’s widowed mother was obscured by time. Subsequent generations knew little of her beyond her maiden and married name, and as it turns out, from further research, they had an incorrect birth date and place for both the mother and daughter. Gradually the full story has been pieced together from a few clues. In 1999, we discovered a picture of Vida E. Smith, daughter of Alexander and Elizabeth Agnes Kendall Smith, standing by a triangular stone. The picture was labeled, "Me, beside Grandmother Wellington’s grave". This was the first hint that Elizabeth Agnes’ mother had married someone named Wellington. A few years later, in the Community of Christ Archives, in Independence, Missouri, some letters, written by Mary Audentia Smith Anderson to a man named Paul A. Wellington surfaced. She wrote asking, ‘Is it possible we are related?" Further research disclosed the fact that this Paul Wellington was a descendant of Elizabeth Kendall and Matthias Wellington. Upon finding this information, I inquired of Ron Romig, Archivist at the Community of Christ Library who informed me that Paul A. Wellington was still alive, in his nineties, living in Independence. I obtained his phone number and contacted him. That very evening he and his wife came bringing the Wellington Family History which he had compiled. This Historical account contains the answer to the mystery of whose grave is marked by the mysterious old triangular stone.

To this day, visitors to the Old Nauvoo Cemetery may discover this triangular stone and wonder "Who is E. Wellington?" We are happy to be able to disclose that she was a quiet, humble, English woman who was converted to the Church of Jesus Christ of Latter day Saints in England, who, with great courage, immigrated to America after she was widowed. She was one who remained in Nauvoo rather than going west with the Mormon Exodus. Because she died young, her story had to be pieced together from sparse records found in the Nauvoo Lands and Records Office (LDS), English birth and death records, and many disjointed and contradictory family stories. Until a chance discovery revealed the Wellington connection, we hunted for her in vain. E. Wellington in the mother of the orphaned, Elizabeth, who married Alexander Hale Smith. She is the ancestress of hundreds of descendants of Joseph and Emma Smith.


The following is a letter to Darcy Kennedy July 7, 2005 from Gracia Normandeau Jones.

"Darcy, as I look at the family of Don Alvin, son of Alexander, do you see Marion Don? That name ought to be Don Marion Max was only a year old when his father died. As I recall, Grandmother Elizabeth Agnes Kendall helped take care of this family. My mother had a letter from Don Alvin's wife, about the time that my sister Jeannette was born. In the old fashioned writing, she thought her name was Jeannette, so she named my sister after her. Genie Graham can probably tell us for sure on the name Don Marion, but I am sure it was a mistake on Audentia's part putting it in the book as Marion Don. Don Alvin died in 1901, when his little children were so young. Their mother worked in the book bindery for the herald in Lamoni and Grandma Lizzie watched the children. Lizzie died in 1918. She also had care of Arthur Marion's first family after his first wife died in child birth in 1816, Lizzie also took on that family. I think she wore out because she died in 1819 poor thing. Lizzie was already caring for Eva Grace's son, after Eva died in child birth... that is Judi Madison's line. I discovered that we had Elizabeth's death date wrong because of finding her obituary. She died on 6 June, and not the 7th of May as formerly entered. I changed the record today, July 26, 2009.