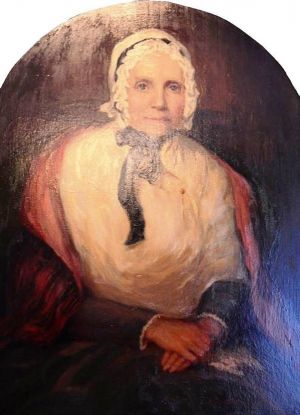 
The following is recorded here because these German "Macks were, at first considered to be the ancestral line of the Prophet Joseph Smith through his Mother, however, further research and with the evidence shown in this database, the proof was found that as earlier supposed, John Mack Jr. was from Inveress, Scotland. His father, John Mack, was a Coventor as shown in this database.[1]


Church History has recorded and passed down for over 150 years that the ancestors of Lucy Mack came from Scotland. FROM THE ENCYCLOPEDIA OF MORMONISM, The maternal ancestors of the Prophet Joseph Smith were named Mack(e). John Macke was born in 1653 in Scotland, a descendant of a line of clergymen. His son Ebenezer inherited his father's large estate in Lyme and married Hannah Huntley (Her ancestors were from the British Isles and came as Pilgrims). For a while Ebenezer was able to keep his family in good style, but their prosperity was short-lived. Their son Solomon, born in 1732, was apprenticed to a neighboring farmer in Lyme (at the age of four). Solomon later reported that he was treated as a slave and never given instruction in religion or taught to read and write, which was a great hardship to him in later life.


In 1759, Solomon Mack married Lydia Gates, a young schoolteacher and a member of the Congregational church. She was well educated and from a well-to-do religious family. Although Solomon and Lydia came from contrasting backgrounds, theirs was an enduring marriage. Lydia took charge of both the secular and religious education of their eight children. They pioneered the upper Connecticut River Valley and settled Marlow, New Hampshire. They later moved to Gilsum, New Hampshire, where the Prophet Joseph's mother, Lucy Mack, was born in 1775. Lucy Mack Smith was given a Patriarchal Blessing on 9 Dec 1834 in Kirtland, Lake County, Ohio by her husband, Joseph Smith, Sr.[2]


This represents the generation of the Mack family that completed the migration from England and Scotland to America. Among Lucy Mack's known fifth-generation ancestors, three special and sometimes overlapping clusters, are noteworthy. First, some of them were children and grandchildren of Pilgrims who came to America on the Mayflower, such as John Howland Jr., who was the son of passenger John Howland Sr. (1602-72/73) was a servant of John Carver, first governor of Plymouth; Elizabeth accompanied her parents, John Tillie and Joan Hurst, on the initial Pilgrim voyage. Her parents died that winter in Plymouth. Samuel Fuller, another ancestor, was the son of Mayflower passenger Edward Fuller. The second cluster of Mack ancestors belonged to the congregation of [https://www.josephsmithsr.com/getperson.php?personID=I30812&tree=josephsmithsr John Lathrop (1584-1653, the Separatist minister who settled Barnstable, in Plymouth Colony, with his congregation in 1638-39. Lathrop and his congregation had languished for two years in prison in London before being released on condition that they leave England. The daughter of John Lathrop, Jane, married [https://www.josephsmithsr.com/getperson.php?personID=I30872&tree=josephsmithsr Samuel, the son of Mayflower passenger Edward Fuller. Other Mack forebears in Lathrop's congregation include John Crocker and Mary Lee.


The third cluster of ancestors Henry Champion, Lewis Jones and Balthazar de Wolf, were members of a congregation that traveled together to Connecticut to settle Wethersfield, one of the first communities in the colony. They were among a large number of LDS forerunners who belonged to that religiously radical congregation. 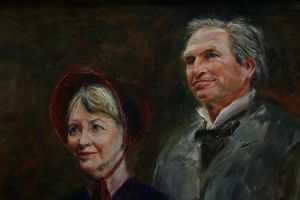 Born in 1775, Lucy Mack grew up in a deeply religious home. In her search for salvation, Lucy studied the Bible, prayed, discussed dreams and visions, and attended religious meetings and revivals sponsored by various denominations. She married Joseph Smith Sr. in 1796 and was the mother of Joseph Smith Jr. and 10 other children. Lucy taught her children to read using the Bible and knelt with them in family prayer. She briefly joined the Presbyterian congregation in Palmyra but readily accepted the restored gospel and was baptized soon after the Church was organized on April 6, 1830.


Lucy Mack Smith was a strong voice in the early Church. She was an eyewitness to the events surrounding the Book of Mormon translation and testified that she hefted the plates and handled the Urim and Thummim. She led a group of Latter-day Saints from Fayette, New York, to Kirtland, Ohio, in 1831. She accompanied her son Hyrum on a mission to Detroit later that year and freely testified of the Book of Mormon. In Kirtland, she helped lead efforts to raise money to build a school. She joined the Nauvoo Relief Society at age 66 on March 24, 1842, and told the assembled women that she “hop’d the Lord would bless and aid the Society in feeding the hungry, clothing the naked.” The Saints cared for the revered mother of the Prophet and listened to her counsel, referring to her affectionately as “Mother Smith.”


In 1844, a few months after the deaths of Joseph, Hyrum, and Samuel Smith, Lucy Mack Smith began compiling her history, assisted by scribes Martha and Howard Coray. Though aging and in poor health, she felt “it a privilege as well as my duty … to give (as my last testimony to a world from whence I must soon take my departure) an account.” Lucy’s manuscript was completed by October 1845, and she publicly announced the project at general conference. When the majority of Church members migrated west toward the Great Basin after 1846, Lucy’s health was declining, and she chose to remain with her family in Illinois. She spent the remaining years of her life with her daughter Lucy Millikin, her daughter-in-law Emma, and her grandsons. Lucy Mack Smith passed away in 1856.


Apostle Orson Pratt first published Lucy’s history in 1853. In the 1860s, President Brigham Young publicly criticized Lucy’s history, pointing to errors in dating and chronology and insisting that Lucy’s memory was impaired. President Young asked his counselor George A. Smith (Lucy’s nephew) to correct the errors and “let it be published to the world.” The revisions altered less than 2 percent of the text.


Like all sources that present narratives from memory, Lucy Mack Smith’s account has flaws, exaggerations, and biases. Historians who have studied her narrative, however, conclude that errors in her history are “relatively minor and infrequent.” Of the 200 names in her history, more than 190 are corroborated by other sources. Moreover, there is no evidence that Lucy’s mind was impaired. A visitor to Nauvoo in 1855 spoke to Lucy and noted that she had “retained her faculties to a remarkable degree.” Lucy’s narrative gives insight into her personality, beliefs, and understanding of Joseph Smith’s calling. It also provides accounts of significant Smith family and Church history events for which there are no other sources. Her history is used in Saints primarily to describe these events and for the dialogue she re-creates from memory.