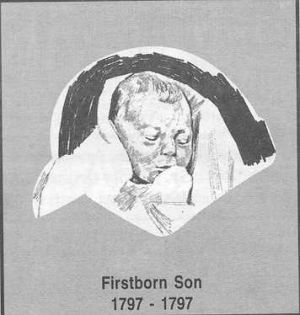 Lucy Mack Smith gave birth to a stillborn baby sometime between 1796 and 1797. The exact birth date is not known. What little is known about the birth of this baby has been confused by conflicting statements in regard to whether the child was a girl or boy.


For many years the official family group sheet listed the first baby as a girl. Within her preliminary manuscript, at one point (yet to be documented) Lucy mentions that her firstborn was a daughter. Whether this comes from Lucy’s own memory of her firstborn or is an assumption by Martha Coray who was writing as Lucy dictated, is not known. The listing as a girl stood until the 1990’s when the family engaged in serious efforts to document all descendants of Lucy Mack and Joseph Smith Sr. After it was discovered, in a statement by Joseph Smith Sr., that in fact the firstborn baby was a boy, this became the official information for the family group sheet.


In Mother Smith’s “History of Joseph Smith”, published by Orson Pratt in England, and republished as, “Biographical Sketches of Joseph Smith and His Progenitors for Many Generations”, in 1912 by Reorganized Church of Jesus Christ of Latter Day Saints, Herald Press, Lamoni, Iowa, p. 33, the firstborn child is not mentioned in her list of children. Lucy Mack Smith, History of Joseph Smith by His Mother, edited by Preston Nibley, published by Bookcraft, Salt Lake City, UT, 1958, has short biographies for each of the children of Lucy and Joseph Smith Sr. There is no mention of the firstborn child. That this baby was a boy became public through various publications; two of the sources for this information are discussed below.


Of particular note is the information included in a footnote by Scott and Maurine Proctor in their “Revised and Enhanced History of Joseph Smith by His Mother Lucy Mack Smith” p. 46:

This information is verified by the following account which is quoted in United by Faith, compiled by Kyle R. Walker, BYU Press, Joseph Smith Sr., by Mark L. McConkie. See page 30:

I have not attained to the age of my fathers, neither do I now know as I shall, but I desire, and for a long time have, to bless my children before I go hence. It is a source of grief to me that I have not been more fruitful to the Lord in days which are past than I have. I have not always set that example before my family that I ought. I have not been diligent in teaching them the commandments of the Lord, but have rather manifest a light and trifling mind. But in all this I have never denied the Lord. Notwithstanding all this my folly, which has been a source of grief to my family, the Lord has often visited me in visions and dreams, and has brought me, with my family, through many afflictions, and I this day thank his holy name. I look around upon you before me and I behold or ask: three seats are, as it were, empty. The Lord, in his just providence has taken from me, at an untimely birth, a son; this has been a matter of affliction but the Lord’s ways are just.

My next son, Alvin, as you are aware was taken from us in the vigor of his life, in the bloom of his youth. My heart often mourns his loss, but I have not disposition to complain against the Lord. Another has been taken also, in his infancy. I pray that my loss may be abundantly supplied, and made up in additional blessings, and that his grace may attend me, and his Holy Spirit be shed abroad in my heart.